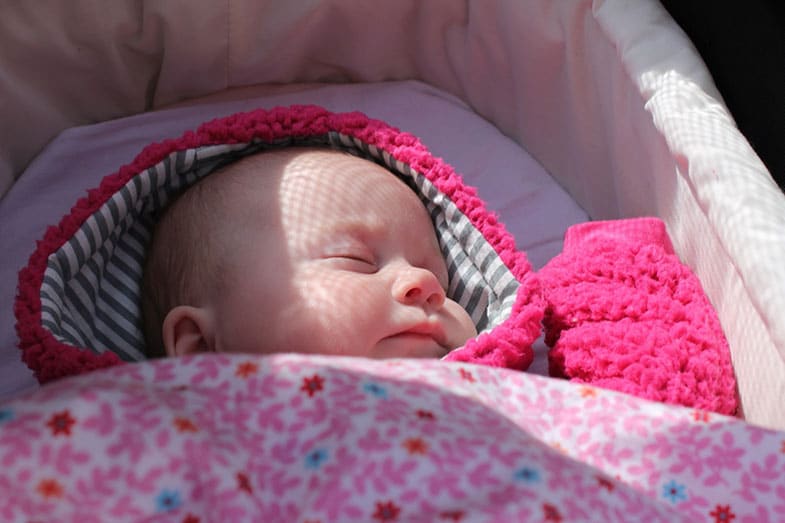 Onesies or full-body pajamas are quite a trend for toddlers and infants. However, they become a problem when we look at the use of hoods. Some pajamas come with hoods, and people are asking if they are safe for babies to sleep in. While they may seem completely safe and harmless for babies, they can actually pose a serious safety risk. Hence, it is not safe for babies to sleep in hooded pajamas. Let’s look into the risks behind them and the alternatives to these types of infant clothing.

Also, take a look at these three popular Amazon products that provide an alternative to hooded pajamas for boys and girls.

In one news article, it was reported that a toddler was strangled on the cord of the sweatshirt he wore, which had a hoodie. While this article of clothing is different from pajamas, it does raise concern over the use of hooded garments for babies. Children wearing hoodies may look cool on the outside, but this raises a lot of safety hazards, both during playtime and when they are going to sleep.

One issue about hooded pajamas is that they do not give enough mobility. The baby’s movement will be limited, and when this happens in sleep, coupled with the danger of having the face covered with a hood, his naptime may be hampered. This can also give them limited reach over what they need to pick up or who to call. They might want to hold on to their parents but are restricted by potentially tight or cumbersome pajamas.

The biggest issue with hoodies is the danger of choking or not breathing because the hood gets in the way. For the most part, they could be avoided if the parents put the hood down, but it can be brought back up by the child on his own whim.

During playtime, the child could cover his mouth with a hood, and that can lead to suffocation. Even having the hood around while walking can be a nuisance for the baby to have. When this happens, they are more vulnerable to choking or being unable to breathe easily. Playing outside should not let them be susceptible to the danger of not breathing in the middle of having fun and so you ought to avoid hoods at all cost.

Aside from the hood itself, drawstrings from the jackets themselves are an issue for any kind of hoodie. Zippers can also lead to choking. A mother reported about her three-year-old daughter almost being strangled at night while moving around in bed. Zip-up pajamas were the culprit, and upon sharing this on Facebook, this alerted many to the danger of wearing full-body pajamas with zippers. It was explained that the child was moving up while the onesie had gone down at the back. The front part had tightened the neck area, and as it did, the zipper got stuck and made it hard to loosen. The baby was unable to reach out to her mother and had difficulty breathing or even making a sound. The mother was able to respond quickly and remove the outfit. It was noted that this was the first time the outfit was worn, and it was a traumatizing experience for the mother. According to some mothers, pajamas should be made to be tight-fitting in order for such occurrences of airway blockage to never occur.

Hoods may seem like a useful cover for heat and cold, but they are also a problem in terms of temperature. Walking around in a full-body suit can be a hot exercise.

Hooded pajamas or any garments that cover the whole body give too much heat to their wearers, and they are not safe in general because they cannot sleep easily in that warmth. As with air blockage, there is a risk of having the head covered by the hood. This heat can be a health risk in the future and could potentially lead to early death for the child.

Newborns can suffer through what is called Sudden Unexpected Infant Death or SUID. For babies under a year old, this case of suffocation can take place when children rather lose any article of clothing that reaches the baby’s face, such as hoods or tops that are loose around the neck area.

Covering their faces is something that parents are advised against doing. Sleeping blankets should cover the body when the nursery room is rather cold for the infant. However, leaving them to overheat is a SUID risk, and parents must watch out for red cheeks or any indicator that the child feels hot.

Choking is seen as a leading cause of death among young children in many parts of the world and while such incidents are rare, they are being monitored by governments worldwide, including the United States and its policy against the use of strings or cords on children’s clothing due to how most choking-related deaths take place in playgrounds and when children wear jackets or pajamas with strings attached.

The first thing to consider is to buy the right kind of clothing for your child. Make use of cotton as it is breathable and soft for the child to wear. They also maintain the temperature at an optimal level for children. Let your child wear mittens as they can prevent them from scratching too hard with their sharp fingernails.

Kids ought to avoid any clothes that have drawstrings. They are a strangulation hazard, especially when they latch on to other objects.

Daycare centers licensed by the California Department of Social Services have advised parents to remove the drawstrings on their jackets when kids are let out to play. Strings on mittens are also another hazard. Strings and drawstrings can get stuck on furniture or other kinds of objects. For more information on government standards regarding baby clothing, look up at the CPSC website and check the Children’s Sleepwear Regulations, 16 C.F.R. Parts 1615 & 1616.

When selecting the right kind of pajamas, one must watch out for the yellow label, which can determine whether or not it is flame resistant. Flame resistance is an important feature for baby clothing, according to the legal standards for baby clothing for nine-month-old children up to size 14.

Loose clothing is also discouraged. They can easily catch fire and can also lead to other instances of suffocation or choking. Flame resistance has been a hot topic among safety experts due to the use of flame-resistant chemicals that could be potentially toxic to kids.

While loose clothing is discouraged and tight-fit ones are needed, if the outfit is too tight, then it might cut off the child’s blood circulation. The fit should allow the child to breathe and move around with ease.

One daycare worker in an online forum pointed out that hoodies for infants are banned in their daycare center. They are troublesome for naps, and there were times when kids actually pulled the hoods during playtime. They have led to some near-choking incidents, and this can happen without anyone noticing it because kids move around a lot.

The hood is quite tempting to pull anyway. Some hoodies and hooded pajamas are safe, but they should never be worn during bedtime or during playtime outside. As much as possible, they must not have any drawstrings or any long thread that can get entangled into some objects around the house. Parents should cut loose strings around the mittens or pants of the pajamas so that kids will not be stuck in benches or stumble on bent nails.

Conclusion – Is It Safe for Babies to Sleep in Hooded Pajamas?

Hooded pajamas are hazardous for a good reason. They are too hot for infants to wear and have features that could cause even more problems. Suffocation is a real health risk, and it can happen in many ways.

Consider a few alternatives to full-body pajamas. In tropical areas, you can let your baby wear sleeveless shirts or wrap-around tops. Also, leaving a blanket around and watching over them can help ensure that they are at an optimal temperature.

You can also explore other kinds of outfits for babies. Avoid any outfit that limits their breathability, especially when in bed. Try avoiding pajamas when they are playing outside. Let them wear form-fitting outfits that maximize their mobility, provided that there are no strings attached for kids to cling on or mess around with. As much as possible, when kids play around outside, they are not at risk of accidentally having their mouths and noses covered by their own clothing or left unable to breathe because a string or a long piece of clothing, such as a hood, is strangling them. Always be vigilant for signs of strangulation. It can mean the difference for the safety of your dear, innocent child.