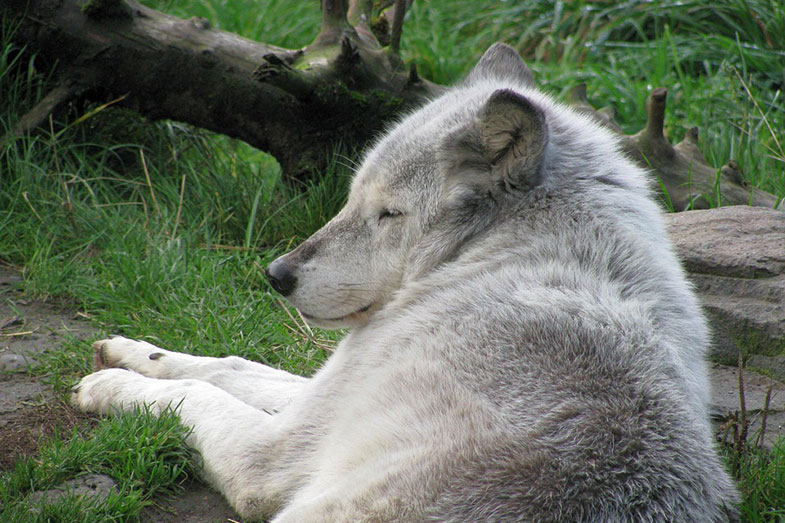 Loss of sleep can lead to many health complications that all animals are susceptible to. They may suffer from weight gain, diabetes, stroke, and heart disease, and the wolf is no exception to this rule. So, despite the very active lifestyle of a wolf, taking naps is still necessary.

Do wolves take naps? Wolves take naps, just like any animal. Sleep is essential for the body to replenish energy reserves and repair any damage done while conscious. Since wolves are very active creatures, they need to rest regularly for survival.

How Do Wolves’ Diets Affect Their Naps?

Wolves take plenty of naps due to their diets. After all, they are the most prominent members of the Canid family and are mainly carnivorous. They are mostly in the Northern Hemisphere that undergoes all four seasons. Their diets consist of small and large prey, depending on their size. Some would feast on moose, goats, sheep, and deer while some would prefer to eat rodents, insects, and rabbits.

Typically, wolves assess the condition of their prey and often attack the one least likely to inflict serious injury on them. Sometimes, wolves would wait for days just so that the carcass had bled out thoroughly. Since it is not often that wolves get to enjoy a location where there are many types of prey, most wolves would devour even the hair, large bones, and the rumen innards just so that they could savor 80-100% of the edible parts of their meal.

When wolves hunt, they usually do so in packs. That way, it is easier to tackle prey larger and stronger than an individual wolf is capable of.

Since wolves rely on hunting to survive, they need to spend large amounts of energy to get food. They spend about 70% more calories than most animals to hunt for food. Wolves are also very active even when they were just young wolves. They need to rest also to supplement that energy loss. When wolves hunt, they need to take power naps to replace the energy they spent.

On the other hand, when food is scarce during winter, wolves also need to take naps or more extended amounts of sleep. This is so they would not immediately use their energy reserves for the rest of the season. Wolves aren’t averse to eating berries when they can’t get meat. When food is plenty, wolves are comfortable and may rest since procuring food is relatively easy.

How Does the Wolves’ Nomadic Lifestyle Affect Their Naps?

Wolves prefer to live in the wilderness, though a certain type of wolf, the red wolf, favor moist areas like coastal prairies. They travel in small packs with at most 30 members consisting of males, females, and young ones.

Packs are territorial and would not hesitate to kill fellow wolves to protect their location. The alpha leads them, the strongest wolf in the pack. The alpha is treated with the utmost respect from the other members and is usually given special treatment.

Wolves go at a pace of 8 to 10 miles while scurrying and can go up to 70 miles in a night. Since wolves don’t have a permanent territory, they usually travel from place to place to find food and shelter. This nomadic way of life means that they do not get to enjoy long hours of sleep since they need to wake up to protect their pack periodically.

The wilderness is kind to no one, and dangers are always surrounding them. They need to be on alert all the time. Also, wolves are nocturnal creatures. They hunt during the night and rest during the day. Even if they could take rests during the day, other predators are awake and could harm them and their packs. The only time when wolves stay for a prolonged period in a particular place is because of the birth of young pups.

To help pups grow and learn their way of life, they are allowed to settle for a while before they travel with the pack. These pups, though more active than their other canid family counterparts, still need many naps to allow for optimal growth.

How Do the Changing Seasons Affect the Wolves’ Naps?

Another factor as to why wolves take naps is because of the changing seasons. During winter, wolves have longer sleeping hours due to the hibernation of most prey and the extra exertion needed to move through the cold months. They would feed on prey for hours before they rest 30% of the time during the season. Late December is also the time for the female wolf to go into the heat, thereby spending more energy for both male and female wolves.

During the spring, wolves prepare for the birthing of the new pups. They create or improve dens for birthing while the wolves sleep outside in a circle. They also hunt to feed the young while they learn how to hunt. This may be the reason why most wolves have little sleep during the spring.

Hunting and Activities at Night

In the summer, the heat quickly drains energy, so most of their activities are conducted at night. Hunting and teaching the young ones are done when the moon is high in the sky. And, lastly, in autumn, most prey are migrating to their places for hibernation so the wolves must travel along with them.

Wolves get little sleep when they are on the move, so they try to get as many naps in as possible. Some wolves also opt to start their pack and find a mate. Doing this is a complicated process because most wolves hunt in packs. Lone wolves have it harder and some would even starve to death due to not being able to find a mate or start a pack in time. This search for a safe place for the winter creates the need for wolves to have more rest at shorter intervals when they have the time.

How Many Hours Do Gray Wolves Sleep?

Gray wolves don’t differ much from red and timber wolves when it comes to the number of hours they sleep. Since they are nocturnal beings, they usually get their sleep during the day. They typically get their sleep from 10 AM to 4 PM. However, they do not sleep continuously. They mostly get power naps that they take when the opportunity arises. They only get more extended hours of sleep during the winter due to the colder climate.

Above everything else, every wolf’s priority is to have food and be safe. They sacrifice sleep to attain these priorities when needed. However, this does not mean that sleep is not one of their priorities. It is just that, in the hierarchy of needs they rank, sleep is lower than food and safety.

How Long Do Gray Wolves Nap?

Gray wolves have been reported to get an average of 15 minutes of sleep per sleep cycle. Then, they would wake, stretch their limbs, do some activities like playing with other wolves or hunting, and then go back to sleep. Some naps may last for 1-2 hours, depending on the situation.

Wolves are generally light sleepers. During winter, wolves get at least 5 hours of sleep after eating their prey. Most wolves would sleep between 12 PM to 6 PM after indulging themselves between 6 AM and 8 AM. They would often even fall asleep beside the dying body of their prey to leave for the next meal.

So, Why Do Wolves Take Naps?

Wolves take many naps throughout their life because it is the type of lifestyle they have to adjust to survive. Their diet dramatically affects the number of naps they take throughout the day. When there are readily available meals, they nap to digest the food they just ate, and in the face of scarcity, they nap to conserve their energy.

Naps are also necessary for nomads like wolves as they give them the rest their body needs but also keep them from being exposed for too long to the elements or other predators in the area. The changing seasons also dictate the length of their sleep. During winter, wolves get the most extended sleeping sessions in the entire year. They get less sleep during the summer and autumn months because of the climate and the general trend of animal migration.

How Long Do Wolves Nap?

Wolves’ naps usually last 15 minutes to two hours. This allows them enough time to regenerate their energies while still being vigilant of their surroundings. Meanwhile, 5-hour naps are reserved for hibernation mode.

All in all, wolves’ naps depend on their opportunity to sleep given the circumstances. If all conditions do not threaten their survival, wolves would have more opportunities to sleep longer.

link to Why Did People Wear Nightcaps? (Why Not Now?)

Knowing how to disassemble a Sleep Number bed comes in handy not only when you need to move houses. You could be doing a bedroom makeover that would require you to move your Sleep Number bed to...