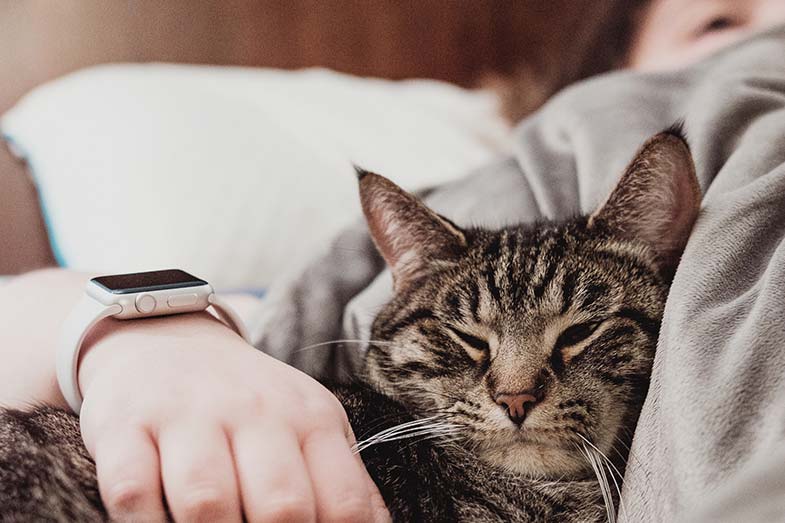 Cats are common household pets because they’re fluffy, cute, and small. Most owners, though, frequently ask, “Why does my cat bite me when I sleep?” or report that their cats are habitually biting them during the night or early morning when they’re sleeping. This incident sometimes leads to poor sleep quality since whether you’ve figured out how to stop IKEA slats from squeaking or how to keep warm on an air mattress for you to sleep soundly, there is a high chance that the bite would awaken you.

So, why does my cat bite me when I sleep? Experts and long-time cat owners say this may be due to the so-called “cat love bite”, which means your cat seeks companionship or affection and communicates it through a gentle bite. It could also be a manifestation of your cat’s protective nature.

With that in mind, how would you know what the gentle, night bite means, and how can you distinguish one from another? That is what you’ll understand today, plus learn how to lessen or eliminate the night-biting habits of your pet. You will also know some of the reasons why your cat suddenly bites aggressively.

Why Does My Cat Bite Me Gently While I’m Asleep?

As similar to humans, cats also have biological clocks. By nature, they are primarily nocturnal or stay awake at night and sleep as much as they can and want to during the day. Some cats are crepuscular or are more active during dusk and dawn hours than any other time of the day.

As such, more often than not, those are the times when they have more needs than usual, and they will try to catch your attention through body language, which is usually biting since you’re sound asleep. Here is a detailed discussion about the most common reasons why your cat bites you gently while you’re asleep, as well as the possible solutions to stop it from doing so.

The most likely reason your cat bites you while you’re asleep is that it might be hungry or wants to play. Usually, when your cat is hungry, the night biting isn’t frequent, while if it wants to play with you, it will bite you every night. That said, you don’t need to distinguish one from the other since you can resolve both with one solution.

Generally, cats have a routine which is hunting, catching, killing, eating, and then sleeping, and this can serve as an excellent guide to help you resolve the issue.

What you need to do is to have a standard two, 15-minute playtime—in the morning or afternoon and then two hours before you and your cat goes to sleep at night. The best games to play should be similar to catching and hunting, like letting your cat chase a furball. That way, you do not just reduce your cat’s usual level energy at night, dusk, or dawn, but you also fulfill the catching and hunting parts of the routine.

Following the routine, the next thing to do after playing with your cat is to feed him or her. If you’ve already fed your pet, then just give your cat a treat it can munch on. Since you’ve fulfilled your cat’s instinctive routine, it is unlikely for him or her to wake up at night or early morning.

Cats might not need as much affection as a dog does, but when they do so, they make sure they get it at that very moment. When your cat bites you while you’re asleep, and you hear it purring softly at the same time, it most likely needs affection. Affection to them is through petting or rubbing his or her belly, back, and more.

However, it is best not to give your cat the attention it requires at that time to ensure he or she wouldn’t interrupt your sleep. It may sound like your making your cat suffer, but it is best for both of you. What you need to do is say “No.” if your cat understands it and/or sleeps with you in the bed. If not, take some time to carry him or her to its bed or sleeping area. Once your cat figures out that it isn’t the best time to get affection from you, it will stop biting you while you’re asleep.

In addition to that, make sure you give the affection your cat needs during day time or while you’re awake. Your cat will soon get used to it and be fulfilled.

Unlike dogs, most cats do not really require a pack or group to survive, but they can adapt socially, developing a relationship with their owner and/or other pets. This is where the need for companionship comes in.

When your cat is left alone throughout the day because you need to work, it will come to a point wherein it will get bored or long for your companionship. Hence, at times, it will wake you up with a bite for some companionship it sought while you were away.

To resolve this issue, ensure you spend some time with your cat before going to sleep, and that is aside from the playtime mentioned earlier. If that is not possible because you’re too exhausted and the only thing you can insert in your schedule is the 15-minute playtime, then it might be time to get another cat to accompany your cat. Just take note that introducing a new cat to your pet will not be easy. You have to introduce the new cat to him or her slowly.

Although not yet proven, as per the experience of some cat owners, your cat bites you while you’re asleep to wake you up intentionally because you might have sleeping problems such as sleep apnea and snoring. It’s not that they have an idea of what’s going on, but they wake you up because of the unfamiliar sound.

A good way to determine this possibility is to install a night camera in your bedroom. Through this, you can determine if the frequent biting is consistent with your snoring or sleep apnea attacks. If proven that you have a sleep disorder, it is best to give your cat a separate sleeping area and cozy pet bed (view on Amazon) to stop it from waking you up each time you snore.

What Does It Mean When a Cat Bites You Hard?

Apart from gentle bites or cat love bites, there are times when your cat bites you harder or with a little more pressure than usual. This kind of bite can mean a lot of things, such as:

Animals, even if domesticated and trained, will usually hurt you if they are annoyed or angry. For cats, even if you’re petting them or they’re sleeping on your lap, there comes the point when they’ll bite you. This is often an indication that they’re already annoyed.

The good thing, though, is that they will usually give you other signs before they even bite, including violent meows and tail flicks, as well as flattened ears. Biting you gently will also be a sign that your cat has had enough of whatever you’re doing.

When you play with your cat, especially a kitten, there are moments when it starts to bite your hand, foot, or other parts of your body. That is normal since kittens are hyperactive, and especially more common if your pet has been separated from its litter too early. If this happens, you should never punish the kitten. Just stop playing with your kitten for him or her to understand that biting too hard isn’t acceptable.

Most, if not all, animals are territorial, so they will protect themselves and their “territory” when a stranger or a new animal or pet arrives. It is best always to advise your friends or guests not to pet your cat the first time. Letting your cat get used to the presence of strangers is also a good way to handle this problem. The same goes when introducing a new pet in your house; slowly introduce the new gal or guy.

In this case, the bite can be either gentle or aggressive. As similar to humans, cats are irritable when they’re not feeling well, but unlike humans, they can’t talk to tell you what they feel, so they will often bite to let you know something is wrong.

With that in mind, if your cat has been in your care for a long time, and it suddenly starts biting while you’re soundly asleep on your memory foam mattress (view on Amazon) or bites you aggressively without any reason any time of the day, he or she might be feeling ill. Other unusual behaviors, as well as common symptoms like weight changes, increased or lost appetite, increased thirst, and urination changes usually accompany the regular biting. If this is the case, you must visit the vet immediately.

The Takeaway – Why Does My Cat Bite Me When I Sleep?

Now that you understand why your cat bites, especially when you’re comfortably snuggling in your hypoallergenic comforter (view on Amazon), it is time to apply what you learned to prevent him or her from doing so. All-in-all, you have to understand your cat’s body language, figure out what’s going on, and let it get used to your sleep-wake routine. The last thing to note is to make sure you don’t punish your pet, but instead, reward good behavior.

With most of the world now using metric units of measurement for virtually anything, you may still come across folks and traders who are more accustomed to using the traditional IS or imperial...

Continue Reading
link to Why Did People Wear Nightcaps? (Why Not Now?)