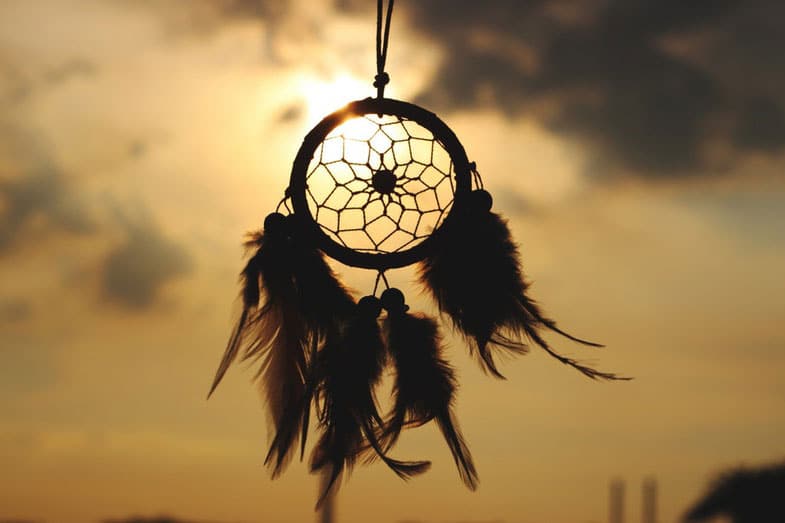 There are no exact numbers as to how many dream catchers you should have in one room. You can place one above your bed or anywhere as close to where you sleep as possible. The belief that dream catchers catch negative dreams and thoughts continues to flourish from past to present. In fact, many of the believers believed that the reward for having such craft inside the house, especially in the room, brings peace and joy.

How many dream catchers should you have in one room? Each day, all bad dreams are evaporated by the sun’s rays. Depending on your room, the number of dream catchers you should hang on your room should coincide with how the sunlight passes through it to perish bad thoughts and dreams.

According to the Native Americans, during the night, when life is peaceful and in harmony, good and bad dreams comes together. Good dreams know how to pass through the holes of the dream catcher while bad dreams are tangled.

Every part of the world and throughout history, there are many beliefs that people still follow up until this day. Just like the Mayans, many of them believed that the world would end based on their calendar. It is an interlocking three sets of sacred calendars called the Tzolk’in which have 260 days. The belief got the worldwide hyped when their calendar is set to end on December 21, 2012 (of course, the world did not end though).

Also, you might be wondering those golden cat charms that wave their hand back and forth when you visit a Chinese or Japanese Store. The Maneki-Neko is a lucky charm cat which was created during the Edo Period in Japan (17th to mid- 19th Century) which waves a hand to call on good fortune to its owners.

Regardless of how modern the world is now, there are still many beliefs and traditions that many people continue to pass it from generation to generation. One Native American belief is the presence of good and bad dreams during the night. For them, good dreams let you live your life in peace while bad dreams do not.

In order to catch dreams and let the good ones pass through it, they made a dream catcher made of grapevine and sinew or thread. The making of this craft comes with a different number of points that also come with different meanings. Take a look at the history, placement inside the house, and purpose of these vibrant and colorful crafts that take your appreciation to the next level.

There are many variations in making a dream catcher, but to put it simply, this craft resembles a spider web. Its strings are tied to every corner of the circle, and depending on how many points are tied up in the circle, it can consist of different meanings which are as follows:

Aside from its unique form, there are many variations in making a dream catcher. It can also have feathers, beads, or animal tokens tied at the end. Its size also depends on how it is made, but traditional ones are only a few inches while others can sometimes reach to as big as one foot.

The popularity of dream catchers rose during the 60s and 70s when renewed Native Americans used them as their symbol on the Pan-Indian Movement. Until today, you will find dream catchers in different reservations in most parts of the USA and Canada. A popular dream catcher is the white gold feather with flowers (view on Amazon) that can be used as a wedding decoration.

The Three Legends of Dream Catchers

There are three widely known legends for dream catchers, with each of them having its own variation. They are as follows:

This legend talks of a spider woman known as Asibikaashi who pledged to take care of the children after the world was dispersed in the four corners of North America. She was having a hard time taking each child to bed every night. The women of the tribe had to make a magical web that traps bad dreams and placed it on the cradleboards. The feather is also tied at the bottom to represent the air.

This legend involves the great teacher Iktomi who appeared as a spider based on a spiritual leader’s vision. Iktomi took the willow hoop of the elder and began to weave while chanting the cycle of life. The elders are told to follow and listen to the good ideas as good forces will bring them to the right path and bad forces will bring them to the wrong path when listening to bad ideas.

The hoop has a hole in the center, and Iktomi told the elders that good ideas will stick to the web while the bad thought will pass through the hole.

In this legend, mothers wove spider web-like dream catchers to prevent their children from waking up with their memories of bad dreams still intact. The willow hoop is then chanted with happy thoughts and placed above the bed. Variations like owl feather for a girl means wisdom while eagle feather for boys means courage.

Before placing your dream catcher, it is important to find the best place inside the house and to know the purpose of placing such. For most people, dream catchers are placed above the bed to put peace and joy by catching bad dreams. However, dream catchers can be placed in many parts of the house as well.

According to some, a dream catcher can also act as a filtering system. Any negativities that enter inside the house will be filtered by it. It can be placed near the windows of the living room or hung in the kitchen so that only positive vibes will bring to the family. It is also important to make a ceremony like chanting good thoughts and positivity before placing it in your desired place.

Fortunately, dream catchers are not just good at trapping bad dreams; they also make a nice decoration too. Since they come in various sizes and designs, choosing the best color and size to be placed inside your room is easy. If your bed is facing the window, it is best to place a 13-point dream catcher right above the bed. Depending on your decorative taste, you may want add one with vibrant colors (view on Amazon) to brighten the room.

A shredded ribbon dream catcher is also a better design to be placed near the window. You may also put the dream catcher at your lampshade beside your bed. Also, vibrant colors and lush designs dream catcher can make your room look stunning.

Dream catchers don’t use expensive materials. Although points and design-based dream catchers are difficult to make, it can actually be easy depending on your preferred design. By just preparing the right materials (a feather, beads, and strings), you can make your own dream catcher design and make it a nice decoration inside your room. Whether you are creative or not, making dream catchers for you or for someone else can bring so much meaning to its origin, traditions, beliefs, and culture.

Where the Heart Leads You

Whether you follow the tradition of placing the dream catcher or not, the most important place to hang the dream catcher is where your heart leads you. If the bedroom is the most important place for you, then it is good to place it above your bed, near the windows, or in the wall where the sun rays can hit it. Decide what your heart wants and think only of positive thoughts. Also, find a place inside your room which you think works best.

Conclusion – How Many Dream Catchers Should You Have in One Room?

Depending on your belief, a dream catcher won’t just serve as a mere decoration – it can also take back its root with deeper meaning. It can be used as a talisman for protection or catching bad dreams. No matter what purpose it serves, it is no wonder that this tradition has helped a lot of people, especially in their sleep.

Regardless of how many dream catchers you place inside your room, always make sure to find a location where you think it will work best for you. Also, it is important to keep your mind clear with negative thoughts and fill it with positive vibes. Whether there is a dream catcher during the night that will protect you or not, staying on the positive side of life will always steer you to the right direction and keep your life meaningful, harmonious, and joyful.