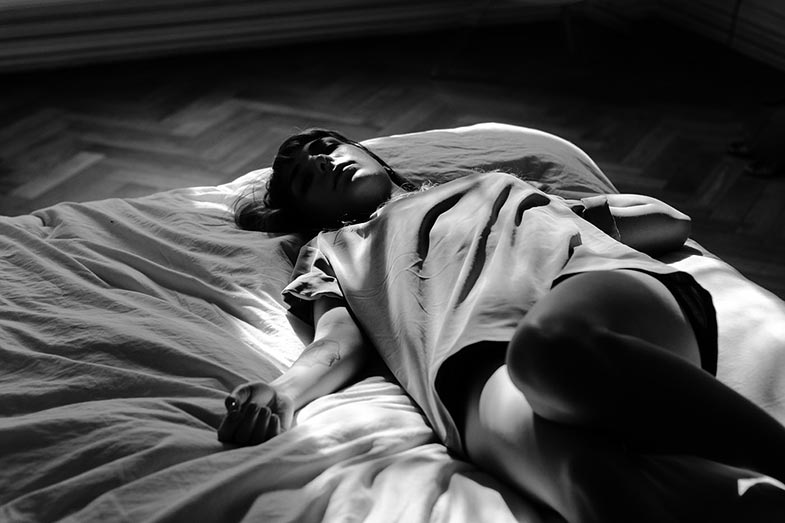 People are curious about mysteries and other phenomena that are hard to explain. A whole genre of literature explores different perspectives about supernatural beings, ghosts, and nightmares. However, this becomes very real in the bedroom when people feel paralyzed in their own bodies and see a dark, shadowy figure at the foot of their bed.

What is the black figure during sleep paralysis? The shadowy figure that people see is a hallucination. During sleep paralysis, the brain thinks the person is asleep even if they are awake. The mind proceeds to dream, resulting in a nightmarish experience that feels very real for the person.

It’s easy to feel scared about something we can’t explain. Hence, this article provides an in-depth explanation of this common occurrence.

The Black Figure During Sleep Paralysis

Before we can explain these hallucinations, we need to understand sleep paralysis first.

What Is Sleep Paralysis?

During sleep paralysis, a person is conscious and awake but unable to move their body. Put the two together, and you get the term “sleep paralysis.” A paralysis episode can last a few seconds to a couple of minutes, and it can happen before falling asleep or while waking up.

The scientific explanation behind this lies behind the sleep-wake transition.

Take a look at sleepwalking: your consciousness is asleep and dreaming, but your body is up and moving. Sleep paralysis is the opposite: the body is sleeping, but the consciousness is awake. In both cases, miscoordination happens in the brain. This is called “desynchronization” or “disassociation.”

Why Do People See Shadow Figures During a Sleep Paralysis Episode?

As mentioned earlier, the black, shadowy figure people see is a hallucination. But where do the hallucinations come in the picture?

In sleep paralysis, Unfortunately, as your body falls asleep, the brain assumes the consciousness is also asleep. It moves into the sleeping phase called the Rapid Eye Movement (REM) sleep, the sleep stage where we dream.

This wouldn’t be a problem if a person experienced harmless dreams while they were awake. The thing is, it can be terrifying being awake but unable to move your body except for your eyes. This causes fear, panic, and anxiety to kick in. When scared, we tend to be more conscious of the environment and the sounds around us.

Think of the times when you felt scared. You became more observant, more alert, more vigilant. Every little sound or movement suddenly felt suspicious and threatening.

Let’s go back to the brain: part of it feels like you are safe, asleep, and snuggled in your soft, luxurious comforter (view on Amazon). The other part is painfully awake. As the two components work together, uncoordinated and out-of-sync, the mind tries to make sense of both. The result is a waking nightmare: a person’s fears at that moment coming to life in front of their very eyes.

Do All People See a Black Figure During Sleep Paralysis Hallucinations?

The shadow isn’t the only common figure people encounter. Sometimes, people say they saw an old hag, demon, or other sinister figures. But some may hear sounds or feel like they were being touched.

As people have experienced throughout history, many beliefs and explanations have popped up. Some believed these were supernatural visions; that the figures they saw were spirits or demons. Some shared that they felt like the creature was attacking them by sitting or choking them.

A psychiatrist theorizes that the hallucination depends on the person’s beliefs. He says that, for example, if the person were a Christian, they may believe that the ‘attacker’ is a demon.

What Do People Experience During Sleep Paralysis?

A questionnaire tool was developed to study sleep paralysis experiences across individuals. It identified 18 types of hallucinations, sorted into three general categories:

Some people ask, “can I die from sleep paralysis?” The answer is no. While people have hallucinations where they felt like they were dying, no research has linked any deaths with the phenomenon.

Also, despite the strong link between the two, sleep paralysis does not always involve having any kind of hallucinations. Some people report experiencing sleep paralysis, but never seeing any shadow persons or feeling another presence. Sleep paralysis is still paralysis even if you don’t see, feel, or hear any scary entities and creatures.

Check out this video on those who have experienced a black figure during sleep paralysis.

Now that we know more about the black figure, other hallucinations, and sleep paralysis itself, let’s talk about what causes it all.

What Are Supernatural Explanations for the Shadowy Silhouettes?

Different cultures have different explanations for the causes of sleep paralysis or reasons behind the shadowy persons and demonic entities.

What Are Scientific or Medical Explanations for Sleep Paralysis?

What makes someone more likely to experience sleep paralysis? Research points to several factors that affect the likelihood for it to happen:

While there are factors that can increase the chance for someone to experience sleep paralysis or suffering from nightmarish hallucinations, there are some things you can do to avoid them.

How Can I Prevent Sleep Paralysis?

The number one recommendation by doctors and by “sufferers” is this: improve your sleep hygiene and habits.

How Can I Get Over Sleep Paralysis?

With or without hallucinations, this can be an anxiety-inducing experience. So what can you do when you experience sleep paralysis? Here are tips to help you get out of an episode:

Some people experience sleep paralysis only once, and some never do. For the people who experience this once in a while or even regularly, it may help to see a professional, especially if you think you have other concerns on top of your sleep.

People throughout history believed that the shadow persons are supernatural or spiritual entities visiting people in their sleep, but science has proven that none of these are real. Due to certain brain processes losing sync with each other, the brain gets confused and starts dreaming as the body remains immobile.

This leads to sleep paralysis, where a person may or may not experience hallucinations as they remain awake in their sleeping body. The most common hallucination is that of shadow people or the black figure, but history records a wide variety of experiences. However, across all these cases, none of the entities seen, heard, and felt, are real.

So rest easy tonight, knowing that you are safe and sound.