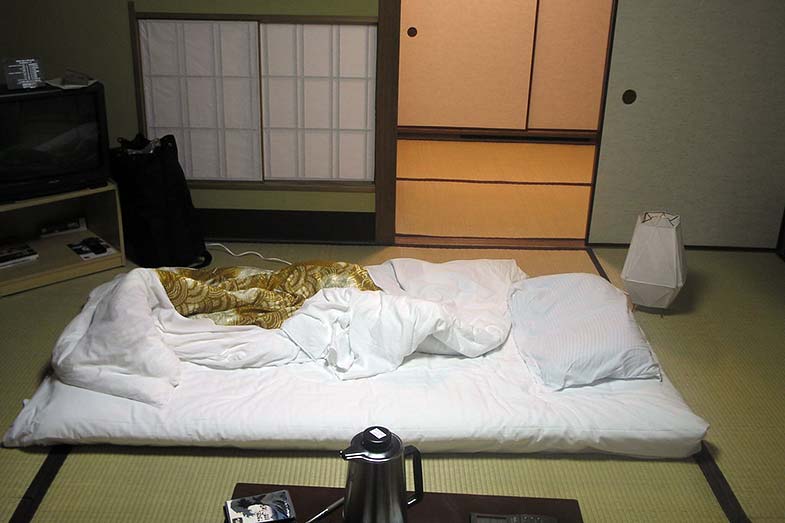 Throughout the world, it is common to find a bed with a frame in the bedroom. However, in a Japanese bedroom, you may not find one. The Japanese have a completely different sleeping approach, which they have maintained for centuries.

These items are spread on the floor of a small room designated for sleeping, and the combination makes a complete Japanese bed. The Japanese floor sleeping system is both excellent and comfortable.

Japanese people usually continue their traditional sleeping methods even when they move to other parts of the world. They have a symbolic attachment to their traditions.

For you to fully understand the reasons and benefits of why Japanese people sleep on the floor, we list some important elements that make up a typical Japanese sleeping arrangement.

What are Tatami Mats?

Tatami mats (view on Amazon) are soft mats that are made from a combination of rush grass cover and rice straw fill. They were initially rolled out on the entire floor of a traditional Japanese house, but in modern times, they are laid on the floor of a tatami room. A tatami room is a small room that is mainly designated for sleeping.

Some families do not have a particular tatami room. In this case, tatamis are rolled out at night in small rooms and rolled up and stored during the day. Therefore, the rooms are open for other purposes during the day. This explains why Japanese homes are small because most places are freed up during the day by removing the beddings.

Japanese prefer to use tatamis because they make the floor more comfortable. Their fabrics allow diffusion of perspiration evaporated by the body during sleep by creating a moisture barrier between the futon and the floor. Moreover, modern tatamis have an in-built moisture-resistant layer.

Here Are Other Parts of a Typical Japanese Sleeping Layout:

Buckwheat hulls are not washed, but they are removed from the case and stored when the case is being cleaned.

Do Japanese Couples Sleep in the Same Bed?

Most Japanese married couples sleep in separate beds in separate rooms. This is ironic because Japanese homes are undeniably small, and therefore space is such a golden premium. Japanese couples sleep in separate beds. This is because of the low integration of the lives of a husband and wife in Japan. White-collar jobs are typical in Japan, and this makes it difficult for couples to coordinate their schedules to spend time together with their spouses. Lack of bonding during times, such as during dinner time, creates a disconnection between the spouses. This is also demonstrated in the sleeping behaviors.

Scholars have tried to come up with theories to explain why a married couple would sleep separately in different beds. One of the theories fronted is the child’s upbringing practices. In Japan, new mothers and babies sleep in the same bed. During this period, the father spends the night in a different as he is not directly engaged in the child’s care and upbringing. As the children grow older, they are naturally separated from their mothers. This separation progression continues typically, and they form a habit of sleeping alone, even in old age. The practice is carried over to marriage, where the husband and wife still sleep in separate beds.

Why Do the Japanese Sleep on the Futons?

First, Japanese sleep on futons because they are very conservative about their culture. The history of futons dated back in the 18th century. They have carried their traditional sleeping system over the centuries up to date. However, modern futons are fitted with specialized modifications to make their sleep more comfortable.

Secondly, Japanese homes are significantly small. Therefore they have makeshift bedrooms whereby futons are rolled out at night and rolled up during the day to open the rooms for other uses. Thus, the small rooms are well utilized, and this prevents congestion, which would have otherwise been created by fixed beds.

Is Sleeping on the Floor Beneficial?

Proponents of the Japanese sleeping system have reiterated the numerous benefits accrued from it.

What Are the Traditional Japanese Sleeping Mats Called?

The traditional mats are called tatamis. They are made from clothes and rush grass cover. The rush is woven in, and the woven ends covered with a cloth. They are usually green when new, but they turn yellow with age. They have a pleasant smell when new, and they create a soft natural feel on your feet. One is required to take off their shoes before stepping on tatamis.

They are made to fit precisely in the room, and therefore houses and apartments are constructed using the standardized tatamis sizes. They have no standard sizes but vary with region. Futons and other bedding materials are placed on top of the mat to make a traditional Japanese bed. Tatamis represent their lifestyle, and it demonstrates the unique Japanese culture.

Why Do Japanese Sleep with the Lights On?

Interestingly, Japanese sleep with lights on to demonstrate their readiness to wake up for work. In Japan, everybody is busy with their work and other engagements. They keep the lights on remind them of their busy schedules and prevent oversleeping. They hardly get enough time to sleep, and this creates the “inemuri” condition whereby people sleep whenever, wherever.

Is Co-Sleeping Common in Japan?

Co-sleeping is a common practice around the globe. In Japan, is happens in a designated tatami room. Two or three large futons are spread over the room for family members to share. However, mothers sleep next to babies and young children. They sleep with their children in proximity until they are old enough to sleep on their own – often at teenage. They believe that co-sleeping promotes independence and self-reliance.

Why do Japanese Uncover Their Feet but Cover Their Belly?

Japanese cover their bellies to keep them warm and promote good digestive health. However, their feet are not included to keep them fresh. This sleeping method makes them comfortable during adverse weather seasons.

Final Thoughts – How Do Japanese People Sleep on the Floor?

Japanese have a rich sleeping culture, which they have carried to date. They have maintained a minimalist sleeping method that is unique and different from other cultures. They sleep on the floor where they make a bed from a set of well-arranged beddings. The beddings are rolled out on top of the tatamis mat at night and rolled away during the day. They were not influenced by the western culture of sleeping on the bed. They enjoy relaxing on the floor. This is part of their lifestyle. Co-sleeping is common for mothers and young children. They sleep with the lights on. They cover their bellies and uncover their feet.

This sleeping system is so much embedded in their lives that they carry with them the traditional beddings when they move to other countries. They are very conservative, and they believe that sleeping on the floor is the most comfortable method of sleeping. It has become part of their life.

link to How to Disassemble a Sleep Number Bed (10 Steps)

Knowing how to disassemble a Sleep Number bed comes in handy not only when you need to move houses. You could be doing a bedroom makeover that would require you to move your Sleep Number bed to...

When buying a Sleep Number bed, note that most of these bed types do not get delivered to your home fully assembled. Hence, you will need to know the correct way of placing the hardware and bed...